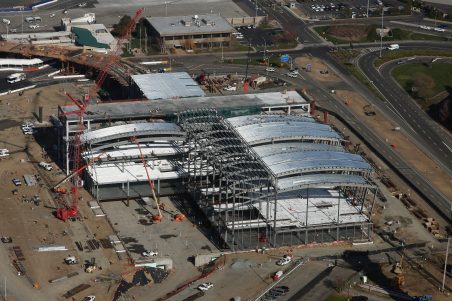 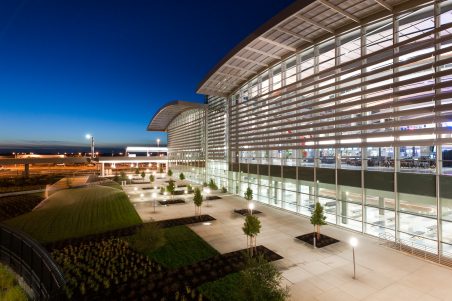 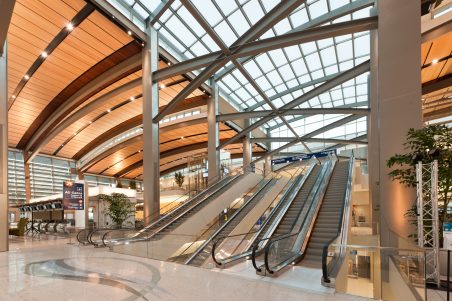 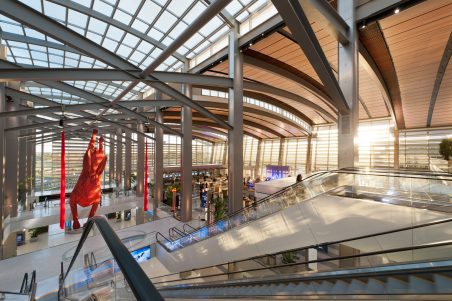 Sacramento International Airport (SMF) celebrated the opening and first departure flight out of the new Central Terminal B on October 6, 2011. The $1.04-billion terminal modernization project called the “”Big Build”” stands as the largest public construction capital improvement project undertaken by Sacramento County to date. The new Central Terminal B is comprised of two individual buildings, a new central terminal and a new 19-gate airside concourse, that are connected by an automated people mover system. The two structures, housing passenger processing, international arrivals, passenger security checkpoint, in-line baggage screening and more than 42,000-square-feet of passenger amenity space, were both designed by the same team but constructed by separate contractors.

Designed by Corgan Associates in association with Fentress Architects, the new Central Terminal B is now a world-class airport facility and a gateway to the Central Valley region. Structural engineering design of the Landside Terminal was developed by L.A. Fuess Partners with the support of Buehler & Buehler Structural Engineers and constructed by Austin Walsh Construction Joint Venture with Herrick Steel.

The design was inspired by the area’s rich history and culture, and the team goal was to create a unique sense of place that represents Sacramento. The facility is intuitive, drawing passengers to the central circulation spine for both departing and arriving functions. Inside, the steel structural members overhead create a dynamic rhythm of light and shadow, an effect inspired by Sacramento’s lush tree-lined streets. Easy wayfinding was created with unobstructed views across the public spaces, a visual connection to the central circulation spine and ample views to the outdoors. Under the 2007 California Building Code, an innovative classification of the building and occupancies as a “mall” allowed for a unique architectural expression by allowing architecturally exposed structural steel. AESS was used extensively in all the public areas of the structure to provide the desired visual quality.

Supporting the Architectural vision of a roof structure reminiscent of a tree canopy included the incorporation of curved tapered steel plate girders spanning 120 feet and fabricated from plasma-cut plates. Architectural detailing included cladding the structural columns with steel plates to create a more robust system. This was a thoughtful approach that not only achieved Architectural goals and structural benefits, but also provided for concealed electrical and plumbing raceways. The integration of an added “flange” to the curved plate girders created a visual effect of the finished ceiling resting on the girder. This blend of custom designed elements along with standard rolled sections worked to together to complete the Architectural expression.

Meeting the seismic performance goals was also critical for this regionally significant structure. The exposed steel structure that best achieved the desired Architectural form created a framing configuration that does not fit within traditional code based definitions. To demonstrate compliance with seismic performance expectations, the Structural Engineers utilized a non-linear push-over analysis. This approach was proposed as an alternate means of compliance, and was validated using an independent peer review process.

Comprehensive BIM models of the structure were developed using Autodesk Revit 2009, allowing for “”on-screen”” evaluation during team design charrettes of architecturally exposed elements and inter-disciplinary coordination items. The models were shared with the fabricator, utilizing them to facilitate connection development discussions during design as well as to seed the 3D detailing process. Finally, models were also shared with the Contractor for clash detection, with regular updates provided during construction.

The Fabricator made extensive use of custom jigs and fixtures to position the members in the shop to minimize welding distortion in cruciform columns, AESS curved roof girders and X-girders. Field erection was sequenced to utilize the rigidity of the X-girders in the central spine to minimize movements and the need for extensive temporary bracing. A system of temporary columns, guy cables and “king posts” with turnbuckles was utilized for numerous sloping columns and cantilever members to provide for temporary support and fine adjustment of elevations and position.

The new terminal was designed with sustainability in mind, and the result is a bright and airy space, with abundant natural daylight entering through clerestories and expansive glass curtainwalls. The curbside wall is canted outward as it rises over 40 feet above the floor and is supported for gravity and lateral loads by 14″” deep HSS members that span between the floor and roof, aligning with mullions in the unitized curtainwall system. These tubes were stiffened by integral construction with the supporting floors, allowing for reduced member sizes, thus lessening the visual impact on the open glazing area. The central spine is enclosed by a glass roof, maximizing daylight and reducing internal energy use. This is one of a number of key design features that the County of Sacramento and Sacramento County Airport System, together with the design and construction teams, have documented in pursuit of LEED® Silver certification for the Central Terminal B and Airside Concourse.